Create your Blockchain DApp with Ethereum and VueJS – Tutorial Part 2 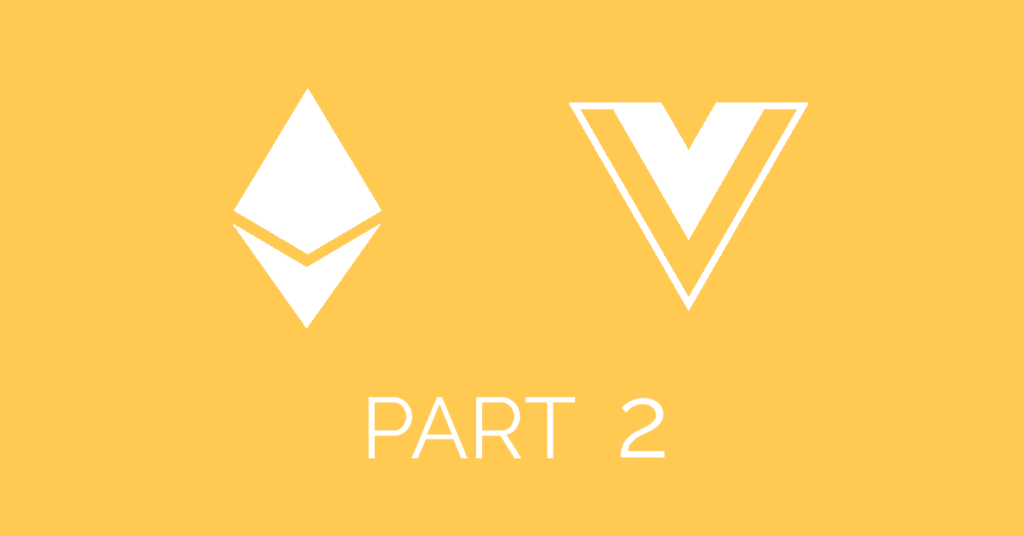 In the second part of the tutorial we are going to develop the front-end and see how to interact with the smart contract developed in the PART 1.

If you missed the introduction and you want to know what this tutorial is about, please read the intro.

In this part we are going through the following topics:

Set up of the Vue project and Web3.js installation

For the set up we are going to use Vue command line interface (Vue CLI): if you have not installed it yet here you can find the commands

Then type the following command to check if everything was installed correctly:

Now let’s create a new project with the following command (you can create the project in any folder you want):

This command will start a wizard, which will ask you for general information like the app name, contact and description (just press enter).

? Project name apptest
? Project description A Vue.js project
? Author
? Vue build standalone
? Install vue-router? Yes
? Use ESLint to lint your code? No
? Set up unit tests No
? Setup e2e tests with Nightwatch? No
? Should we run `npm install` for you after the project has been created? (recommended) npm

Once the installation is done, go inside the folder of the project which has just been created:

And let’s pull into the project the latest stable release of Web3.js (at the time of this writing):

Note that if you do not specify the version, npm will install the latest version of Web3.js (still in beta) and the dApp will not work.

On the terminal you should see something like this:

Project set up and structure

Open the file index.html in the root folder app-users and paste the following CSS in the head section:

The body has to include only the following tag:

The folder app-users/src contains the source of our project and now we are going to tweak it a little: delete the folder routes and create two folders called libs and views and finally create an empty file called routes.js.

In the PART 1 of the tutorial you deployed the smart contract Users.sol in the blockchain: now copy the file build/contracts/Users.json into the folder app-users/src/assets/.

The structure of the folder src should be like this:

The BcExplorer class: Web3.js made easy

Our dApp uses the class BcExplorer to handle the interactions with the blockchain; BcExplorer makes easy the use of Web3j.js.
With BcExplorer you can:

Note: the BcExplorer class works with the stable version of Web3.js 0.X but it does not work with the latest beta 1.x.

Let’s start with the project!

The file main.js is the bootstrap file of our dApp: the only line of code added here is:

It will help to handle the cross-components events.
As you can see from the main.js, the first component that will be rendered is App.vue.

App.vue defines the structure of the pages with the menu on the top (TopMenu component) followed by the page content <router-view>.

The content page will be displayed only when the connection with the blockchain is established successfully (bcConnected is true) and no error occurred (bcConnectionError is false).

NOTE: you can be successfully connected to the blockchain but the address of the smart contract might be wrong; bcConnectionError is a variable which indicates if general errors occurred with the blockchain.

The class BcExplorer is instantiated in window.bc so it can be accessed everywhere.

In case you are wondering why the initialization of BcExplorer and Web3.js is in a mixin and not in the main.js.
I will give an example: you have a dApp with 10 pages and only in 2 of them you are using Web3.js; since you need Web3.js in 2 pages only, you can initialize Web3.js in one of those two pages instead of doing it everywhere in the main.js, which also slows down the initial loading.

If you check the code of this component you will see it includes the mixin mixinViews. We need the BcExplorer functionalities because we have to check if the visitor is already registered and to show if the connection with the blockchain is established.

To show the message that the connection is established we can easily use the variable bcConnected defined in the mixin:

In the created method you can see that

After the event userregistered is fired the function checkUntilUserIsRegistered checks every second if the user has been registered successfully calling function isRegistered (declarated in the mixinView.js):

The checking stops when the block is mined and so the user is actually registered.

This control must be done every second (and not only once) because the mining of the block needs time.
Let me explain it with an example: let’s suppose that your dApp uses a blockchain where the block mining is 5 minutes long; when a user signs up a transaction is submitted but it can take 5 minutes before the block is mined (so the user will be effectively registered).
If you are using Ganache the mining is instantaneous.

Another function in the created() method is called: checkUserIsRegistered.
This function changes the link from Register to Profile as well if the user is registered but the control is performed when the component is created.
This function has a timer too, that performs the check every half of a second, as connection to the blockchain can require some time; the checking stops when a response is received.

Let’s check the main functions used in the views.

How to register a user profile

As you can see, the smart contract function registerUser to register a user is called. The function must receive 3 parameters:

If the registration is successful a global event userregistered will be fired:

This event will be caught by the TopMenu component as described before.
Then redirectWhenBlockMined() is triggered: this method waits until the block is mined then it redirects the user to its own profile page_

A friend of mine asked me: bitcoin was invented 10 years ago, why has not anyone come up with a real product yet? Has anything been disrupted by blockchain? His disappointment is quite ...